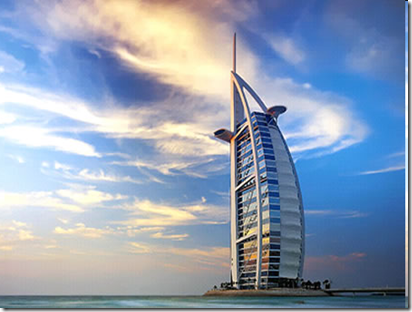 Tom Wright is the architect and designer of the Burj al Arab in Dubai.  The Burj Al Arab (Tower of the Arabs) was conceived in October 1993 and completed on site in 1999.

Tom Wright′s first drawing of the Burj al Arab concept  was shown to the client in october 1993 which along with the simple card model shown above convinced the client that the tower should be built.   The brief to the architect was to create an icon for Dubai, a building that would become synonymous with the place, as Sydney has its opera house and Paris the Eiffel Tower  so Dubai was to have the Burj al Arab.

The felt pen illustration  was an early development sketch of the hotel drawn by Wright on a paper serviette whilst he sat on the terrace of the Chicago Beach hotel which stood adjacent to the site of the Burj al Arab. 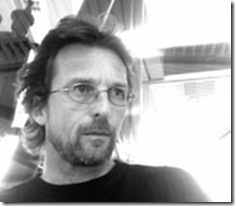 Tom Wright lived in Dubai during the design and construction of the project working as the project Design Director for Atkins one of the world′s leading multi discipline design consultancies. 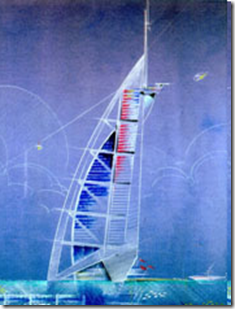 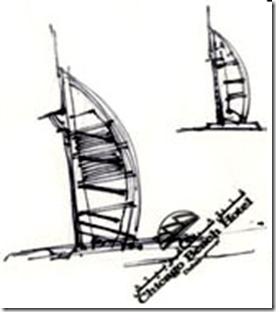 Since 1999 Tom Wright has continued to work for Atkins as Head of Architecture from the Atkins H.Q. in Epsom, London. Tom Wright is British, born in Croydon a suburb of London on 18th September 1957.   Educated at the Royal Russell School and then Kingston Polytechnic school of Architecture.

Wright became a member of the Royal institute of British Architects in 1983 and has been in practice ever since.     The current portfolio of Tom Wright, includes  work throughout Australasia, the Far East, the Middle East, Europe and the USA.   Example projects include the Al-Rajhi Tower in Riyadh, and the Lakeside Hotel in Tunisia,  but the  Burj al Arab is his master piece.